More in This Series More From The Battle for the Constitution

This is a profound misunderstanding of the American constitutional system.

February 29, 2020
Jane Chong
Former law clerk on the U.S. Court of Appeals for the Third Circuit 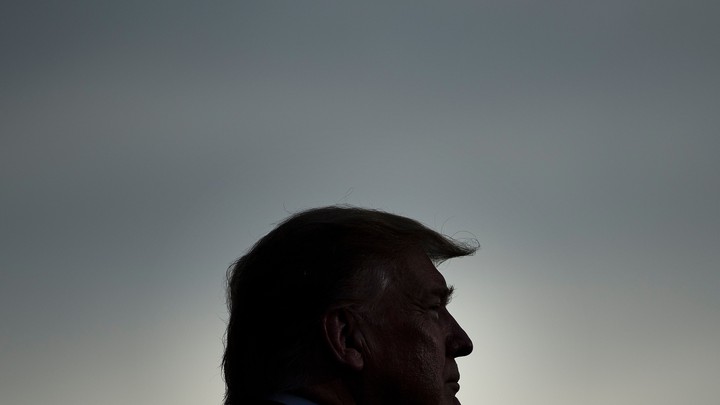 Trump invoked that catchphrase earlier this month, when, in apparent response to his angry tweets, the Justice Department undercut its own prosecutors and reduced their recommended prison sentence for Roger Stone, Trump’s longtime friend and former campaign adviser. Trump denied having asked the Justice Department to step in—but not without insisting that he had the “absolute right to do it” if he so chose.

That claim is a favorite Trump refrain, and like a brake warning light, it tends to signal that the car is no longer safely in contact with the legal road. In May 2017, after The New York Times reported that Trump had spilled highly classified information to Russian government officials, he tweeted that he had “the absolute right to do so.” In December of that year, when asked whether the investigation into Hillary Clinton’s emails should be reopened, Trump invoked his “absolute right to do what I want to do with the Justice Department.” Six months later, in June 2018, Trump tweeted that Robert Mueller’s investigation was “totally UNCONSTITUTIONAL,” and that if push came to shove, “I have the absolute right to PARDON myself.”

Things snowballed in 2019. In February of that year, Trump announced that he had the “absolute right to declare a national emergency” in order to obtain border-wall funding that Congress had not authorized. In April, Trump denied reports that he had offered to pardon the Customs and Border Protection commissioner if he were arrested for enforcing Trump’s policies at the U.S.-Mexico border, but tweeted that he had “the absolute right” to close the border. In October, in the midst of the House impeachment inquiry into his July 25 phone call with Ukrainian President Volodymyr Zelensky, Trump claimed that he had an “absolute right, perhaps even a duty,” to ask foreign countries for help in investigating corruption. In November, he derided Marie Yovanovitch, the former U.S. ambassador to Ukraine, by tweet in the middle of her testimony before the House Intelligence Committee and claimed his “absolute right to appoint ambassadors.”

The temptation may be to dismiss Trump’s theory of absolute rights as a showy rhetorical tic. But one of his very first acts as president was to operationalize that theory, not long after debuting it on the campaign trail. “The president has the right to ban any group or anybody … that he feels is going to do harm to our country,” Trump explained in a June 2016 appearance on Howie Carr’s radio show, while inveighing against Muslim immigration to the United States after the mass shooting at Pulse, a gay nightclub in Orlando, Florida. “They have an absolute right, Howie.” Seven days after his inauguration, Trump signed a legally and operationally unworkable executive order imposing a 120-day ban on entry for all refugees from seven Muslim-majority countries and an indefinite ban on all refugees from Syria, which reportedly underwent none of the usual interagency review processes.

Most recently, less than a week after claiming his “absolute right” to intervene in Stone’s case, Trump issued a round of pardons that conspicuously included his friends and associates, most colorfully Rod Blagojevich, the former Illinois governor and a contestant on Trump’s show Celebrity Apprentice, who was caught on FBI wiretaps in 2008 trying to sell President Barack Obama’s Senate seat. The move suggests more coming interference on behalf of Stone, the “tough, loyal guy” whose case, Trump alleges, was “totally out of control and perhaps should not have even been brought,” and whose trial, Trump claims, suffered “significant bias.” Last week, when asked again about his plans regarding Stone, Trump mused aloud, “I’m allowed to be totally involved. I’m actually, I guess, the chief law-enforcement officer of the country.”

Read: Will Trump destroy the presidency?

The point is, Trump’s theory of executive power does real work and has had real consequences. The opening memorandum prepared by Trump’s defense team for his Senate impeachment trial, for example, served as an homage to the general concept of absolute rights and built from its vision of an unconstrained executive the startling argument that the president cannot be impeached for abuses of power. Trump’s coinage actually made a revealing, and legally mystifying, appearance in the brief: “It is well settled that the President has a virtually absolute right to maintain the confidentiality of his diplomatic communications with foreign leaders.” As support for this sweeping claim, Trump’s team cited the Supreme Court’s 1974 decision in United States v. Nixon. But that decision notes nothing more than the courts’ traditional deference to the president’s claims of executive privilege over communications bearing on sensitive foreign-policy and national-security matters—and ultimately determined that President Richard Nixon had to hand over tapes subpoenaed by the special prosecutor investigating the Watergate scandal.

Where Trump derived the idea that as president he enjoys absolute rights is unclear. But his chosen phraseology is sticky and evocative. It carries a quasi-juridical ring that belies its conceptual incoherence. Closely examined, his incessant invocation of the phrase evokes the image not of the leader of the free world, but of a freeholder enjoying untrammeled and indefinite possession of his estate. Constitutionally baseless but rhetorically compelling, the whole concept of “absolute rights” is best described as a legal innovation by a real-estate mogul who understands power through the prism of private property rather than public obligation.

As the owner and developer of a sprawling global real-estate empire, Trump, of course, knows a thing or two about property. And in the world of property, the best kind of ownership is “absolute”—or “perfect”—title. Absolute title grants the title holder unequivocal, unchallengeable ownership rights. The property is free and clear, to be enjoyed and used by the owner as he sees fit. It is encumbered by nothing. The owner is beholden to no one.

What does it mean for Trump to claim ownership of not a golf resort but the executive branch of the U.S. government? Commentators have repeatedly observed that Trump “has often seemed to conflate himself with the government, and his own interests with the nation’s.” Thus, to criticize Trump is to attack America. This makes some sense if the unitary executive is reimagined as a sole proprietorship, an arrangement in which the business enterprise enjoys no legal existence separate from its owner.

“I have an Article II, where I have the right to do whatever I want as president,” Trump crowed to a group of teenage conservatives at a Washington, D.C., summit in July, awkwardly waving his constitutional authority like a golden ticket entitling him to full possession of a chocolate factory. Conceived this way, as absolute title, Article II vests the president not with power sanctioned by and concomitant with his obligations to the people, but with rights enforceable against them.

This is a profound misunderstanding of the American constitutional system. Within that system, rights protect individuals against incursions by the state. The assertion of “absolute rights” by the country’s chief executive stands this concept on its head by purporting to insulate state conduct, however arbitrary and transgressive, from review or even critique. The idea is incompatible with the design of Article II, which vests the president with conditional, circumscribed authority to ensure that the laws are “faithfully executed.” Some of that authority is his alone to exercise—for example, only the president can grant pardons, command the armed forces, and recognize foreign states. But to the extent he misunderstands or abuses that authority, the Constitution facilitates challenge by the other branches. In extreme cases, that challenge is supposed to take the form of impeachment and removal.

In short, absolute presidential rights have no place within a constitutional democracy, wherein all power is derived from the will of the governed. And they have no purchase in a three-branch federalist republic, wherein the national executive is subject to check by Congress and the courts, and forbidden from seizing powers held by the states.

Since the start of his presidency, Trump has been criticized for asserting what amounts to a kingship—prompting one of his personal lawyers, Alan Dershowitz, to announce during the House impeachment inquiry that as president, Trump “has the power that kings have never had.” Dershowitz’s unabashed embrace of the comparison calls to mind the closing words of Alexander Hamilton’s “Federalist No. 69,” which underscore the differences between the president of the United States and the king of Great Britain. The president is an officer elected by the people; the king is “perpetual and hereditary.” The president is “amenable to personal punishment and disgrace”; the king is “sacred and inviolable.” Hamilton concluded his exercise with a call to resist those who claim “things so unlike resemble each other.”

But closely examined, the executive-power claims pioneered by Trump, the consummate wheeler and dealer, may not require leaping to a wholly different governmental paradigm. Something messier is happening here, something less lucid and self-aware than a power grab by a would-be monarch. For Trump, who inherited and then spent a lifetime expanding an empire that embodies ownership on a scale unimaginable to the ordinary American, power has always been property, property has always been power. James Madison wrote, “Government is instituted to protect property of every sort.” In Trump’s view, that protected property happens to include all the authorities and privileges encompassed in the “absolute rights” of the American presidency, the greatest deal he has ever closed.

This story is part of the project “The Battle for the Constitution,” in partnership with the National Constitution Center.

We want to hear what you think about this article. Submit a letter to the editor or write to letters@theatlantic.com.

Jane Chong is the former deputy managing editor of Lawfare and served as a law clerk on the U.S. Court of Appeals for the Third Circuit.